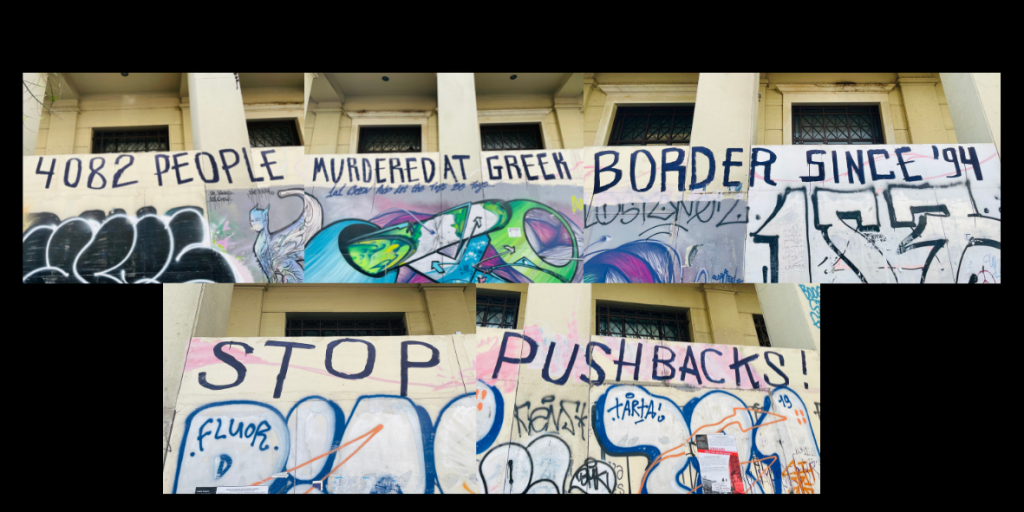 The annual feminist no borders summer school provides a space of encounter, mutual learning, and inspiration for researchers, activists, artists, and members of community organisations to exchange experiences, strategies, and struggles across and against borders.

We seek to displace the hegemony of academia as the primary location from which knowledge is produced and distributed.

It’s an antiracist, abolitionist feminist space that seeks to challenge the division between knowledge and practice and to intervene in the dominant ways in which borders are reproduced in academia, media, and humanitarianism.

In the summer school, we practise alternative ways of learning, listening, and speaking to each other, prefiguring political communities through which we’d like to struggle.

In 2022, the summer school took place over four days in three physical locations: Palermo, Heraklion, and Berlin. There was also  a virtual node to facilitate the participation of those who are prevented from travelling due to the border regime (as well as other barriers).

Each day, we met  within each node as well as hybridly, to enable conversations and exchange across these locations, and to connect our struggles in different localities.

For details, see the Final programme and read the Report. 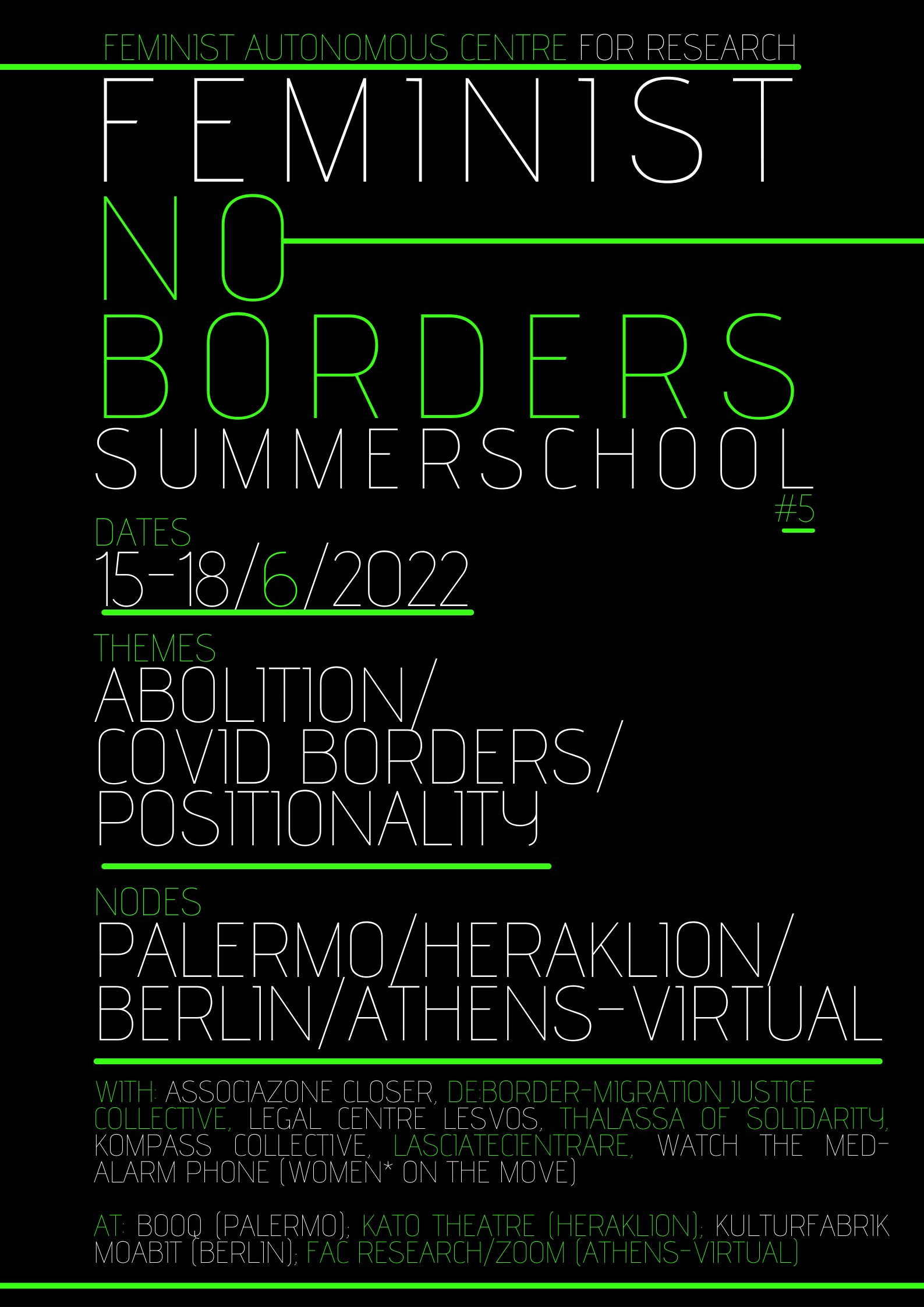 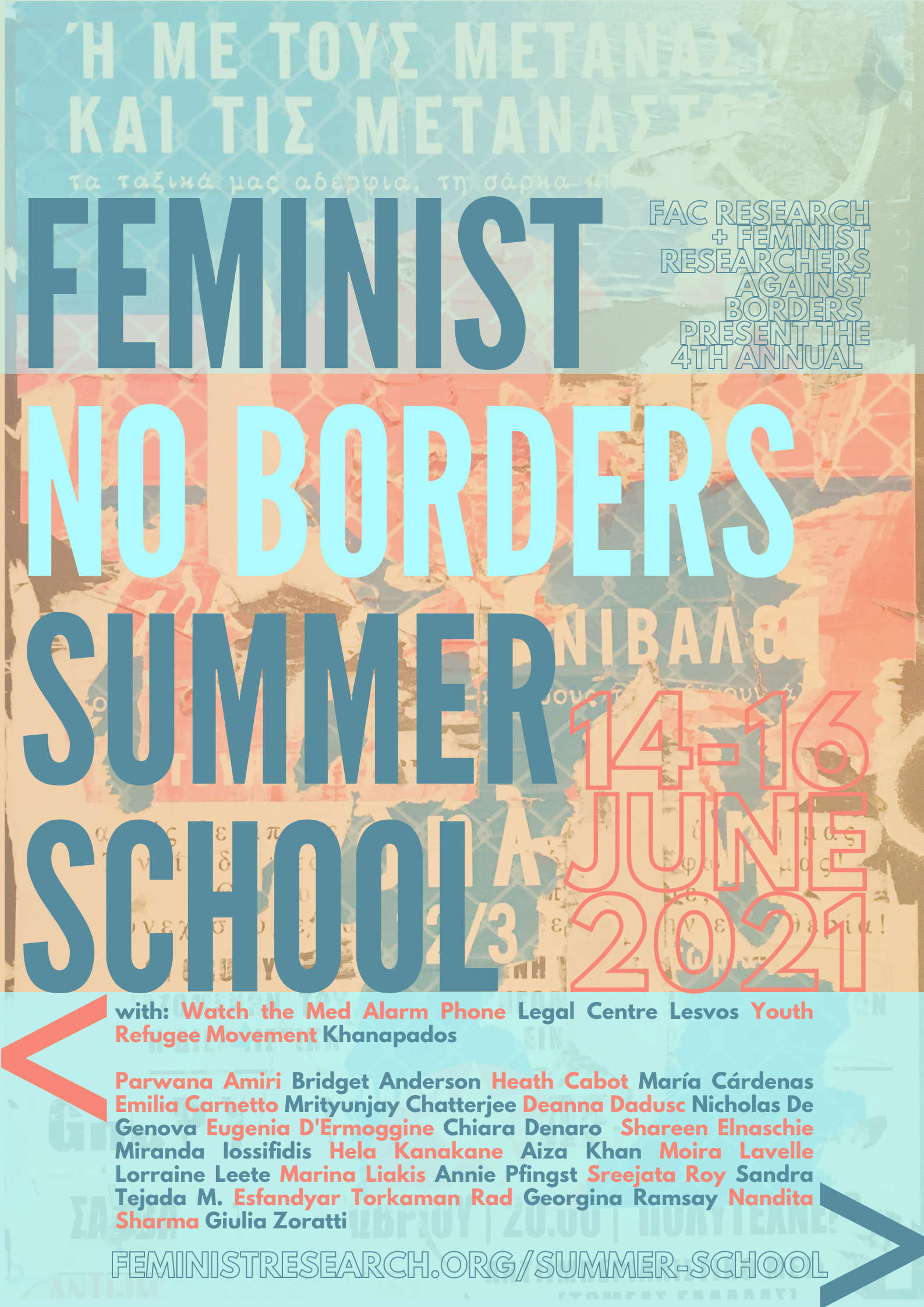 The Feminist No Borders Summer School is four years in the making.

The brainchild of Feminist Researchers Against Borders (FRAB) has survived a packed classroom in the Polytechnic University of Athens in the July 2018 heatwave, and was nourished in its life course as the first gathering we had at FAC in June 2019.

In 2020, due to the coronavirus pandemic, we proposed a slower, virtual process, which consisted in weekly meetings of four working groups from April to June, as well as video keynote lectures/discussions and a virtual assembly held in June, kindly hosted on the platform of Off University.

In 2021, we held an intensive, virtual three-day summer school. We are grateful to the  421+ past participants, invited speakers, and community experts who gave this summer school its existence.

First, by the referendum through which the electorate rejected a new memorandum of understanding between the government of Greece and the Troika of its creditors.

Then, by the deal reached between the Greek government and the leaders of the Eurozone in defiance of the popular vote.

Hotspots were created on five islands in the eastern Aegean sea, while camps and detention centres proliferated on the mainland.

When the coronavirus first appeared in Greece, the Greek government exploited what it declared as a  “double crisis.”
In addition to the pandemic, it proclaimed  a  “border crisis” when, in protest over the EU’s failure to uphold the terms of the EU-Turkey deal and its lack of support for Turkey’s imperialist military campaign in Syria, Recep Tayyip Erdoğan threatened to allow refugees to cross the Turkish border into Greece.

In response, the Greek government imposed a “state of emergency” in March, suspending asylum processes.

Exploiting the coronavirus pandemic, the Greek government has justified the containment of refugees by conflating quarantine with detention.

Immediately following the fire at Moria on 9 September 2020, the government’s response to the “new crisis” was the creation of the new, closed, and highly policed hotspot on the former shooting range at Mavrovouni and the eviction of the solidarity camp The Village of All Together (PIKPA) and the closure of the municipality-run Kara Tepe camp for “vulnerable” asylum seekers.

The conditions of visibility have dramatically shifted since the onset of the “refugee crisis” six years ago, when Lesvos became the epicentre of the photographic gaze turned on people arriving in Europe.

Now, due to the media ban and nondisclosure agreements imposed on volunteers and staff at camps and hotspots, as well as the harassment and criminalisation of people forced to live in detention camps when they attempt to document the conditions, the need to pay witness and amplify the visions and voices of people trapped in carceral border spaces is ever more urgent.

In response to extensive, thorough documentation by civil society human rights observers, the Prime Minister, the Minister of Migration, and other officials have repeatedly denied conducting pushbacks as “fake news,” while attacking search and rescue NGOs with charges of criminal organisation, espionage, violation of state secrets, and facilitation of entry.

While we are writing this call, we witness whole islands being turned into spaces of administrative torture, and the sea turned into an aqueous cemetery, the theatre of an undeclared war, the scene of pushbacks and pullbacks, resulting in thousands of deaths.

Closed detention centres are being constructed on hotspot islands and the mainland.

The imposition of a new asylum law violates the very right to apply for asylum in Greece.

Following the violent evictions of self-organised squats in Athens and other urban centres, refugees have been evicted from UNHCR-funded apartments, left to fend for themselves to “integrate” into a racist society, resulting in homelessness and extreme precarity.

We experience the privatisation and militarisation of public spaces, including incessant stop and search procedures through racial and gender profiling.

We protest sexual assaults and feminicides, at the borders, on the streets, in prisons, and in homes turned into prisons.

The multiple forms of precarity and the various velocities at which some human (and nonhuman) beings are consigned to death through the necropolitics of the “crisis regimes” have intensified divisions amongst us, along lines of racialised citizenship, class power, and heteropatriarchal normativities.

At the same time, a growing interest in, and commitment to abolitionist politics, in the wake of the resurgence of the Black Lives Matter Movement, opens up spaces for imagining and prefiguring border abolition, prison abolition, police abolition, as well as the abolition of the heteronormative family and of the system of compulsory binary gender assignment.

The Feminist No Borders Summer School has aimed to think together these abolitionist demands. Thus, we ask: What becomes possible when we inhabit the borderlands with the conscious intention of breaking down the multiple borders that have been erected to keep us apart?

What have we learnt from (our) being together in Athens during the previous four summers? That incisive analyses about the phenomena comprising our bordered reality, and hard-wrought experiences of struggle and resistance, can be shared and synthesised with care, passion, and joy, when queer feminists who oppose the international nation-state system of borders meet in a room (or in cyberspace).

We seek and offer connection, collaboration, mutual support, friendship, and love to all those who struggle for survival and for possible better worlds. 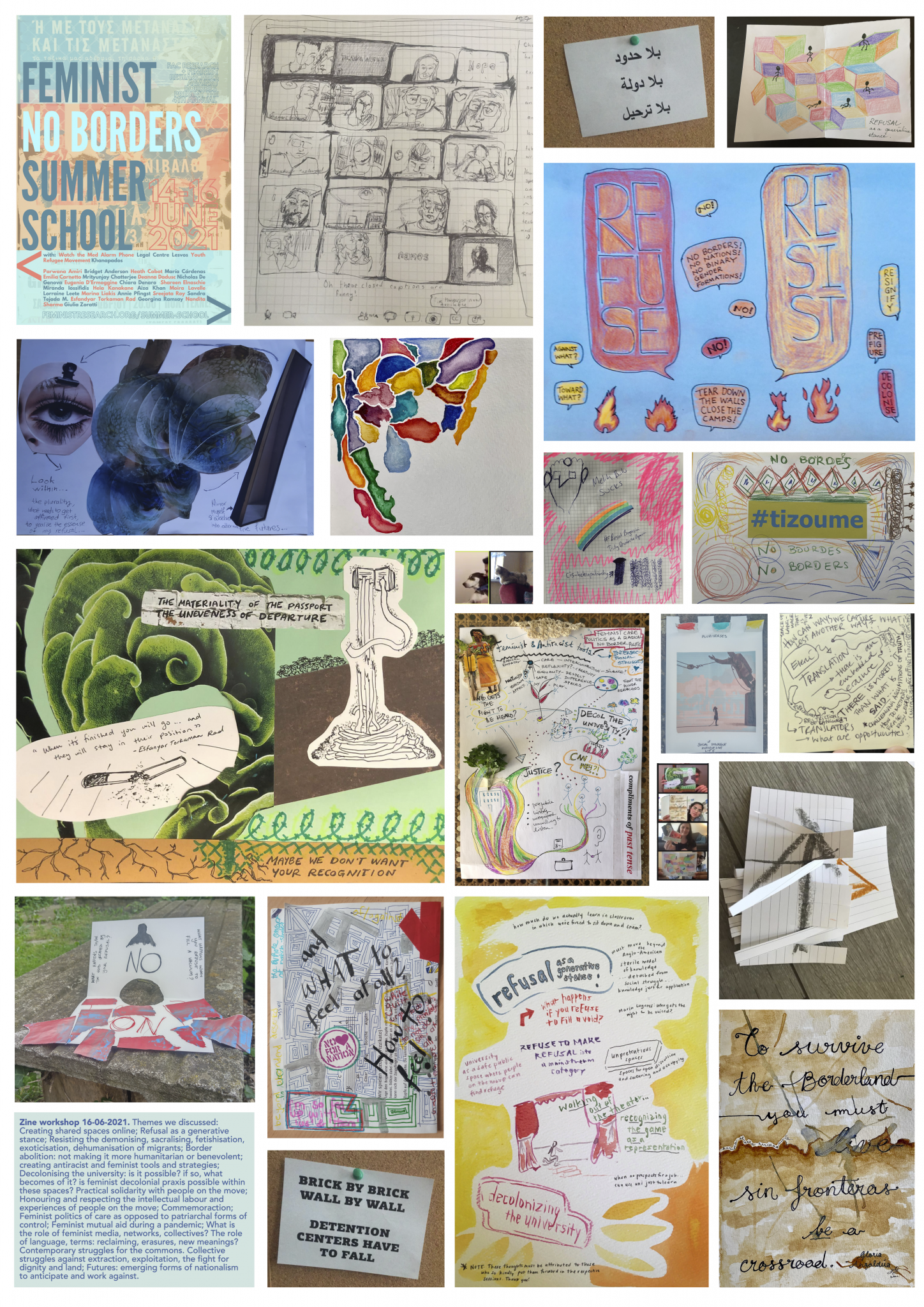 Above: a collage of art works created by participants in the zine workshop during the 4th annual Feminist No Borders Summer School, facilitated by Miranda Iossifidis, who also created the collage. 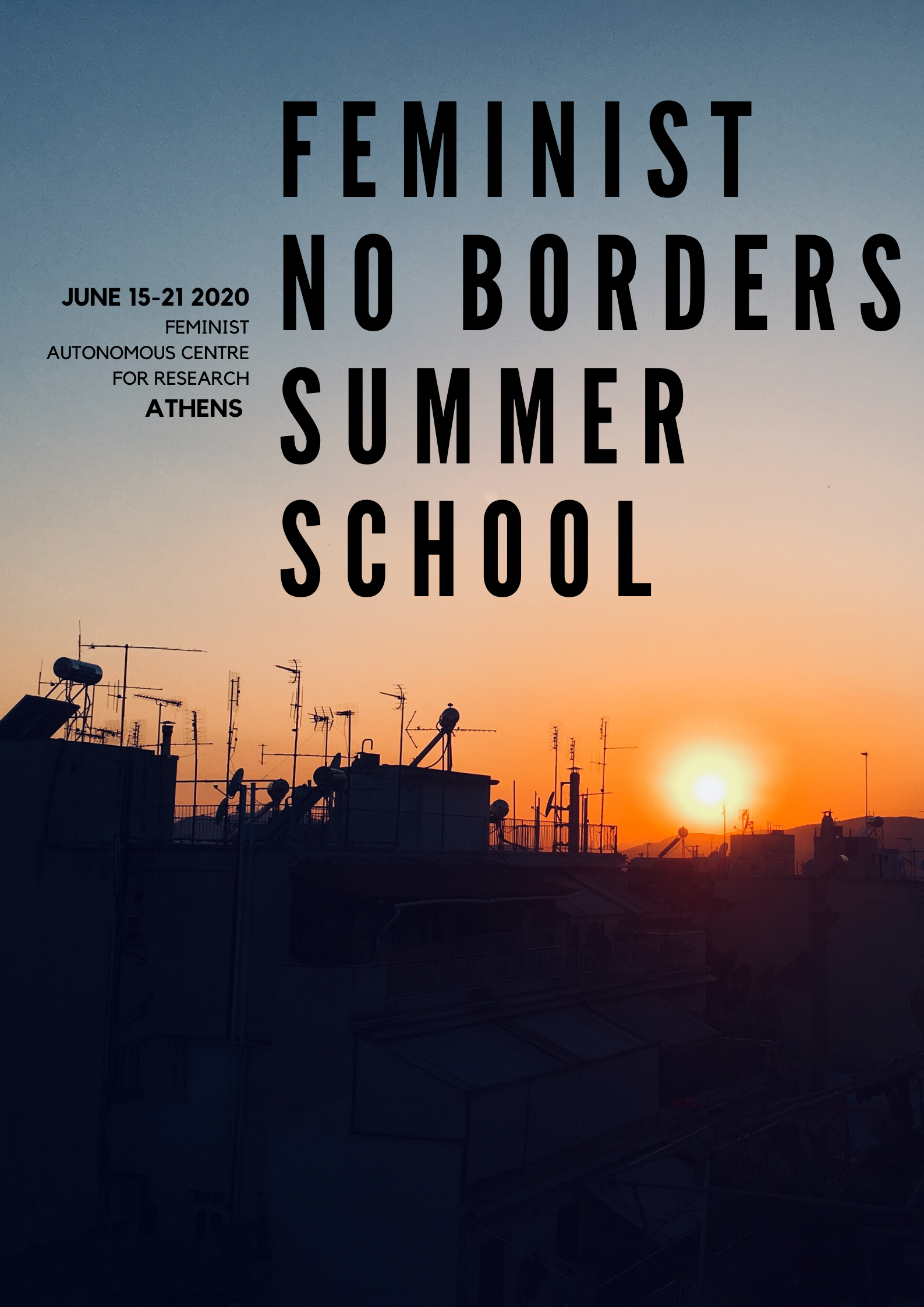 Due to the coronavirus pandemic, and mindful of the risks and exclusions involved in an in-person international meeting of its kind, we took the decision to postpone the Feminist No Borders Summer School (scheduled for 15-21 June 2020) until pandemic conditions subsided.

Instead, we undertook a slow, virtual process with the 35 participants and 5 invited keynote speakers, which consisted in weekly meetings of four working groups from April to June, and, over the week for which the FNBSS was planned, video keynote lectures on the 16th, 17th, and 18th of June and a virtual assembly on the 20th of June, kindly hosted on the platform of Off University. You can watch the video keynote lectures below.

Below: A zine collectively created by participants in the Feminist Researchers Against Borders Summer School in July 2018. The zine workshop was conceived and facilitated by Miranda Iossifidis, who also compiled, photocopied, and digitised the zine.

Learn more about our Read more.

Necessary Always Enabled
Necessary cookies are absolutely essential for the website to function properly. This category only includes cookies that ensures basic functionalities and security features of the website. These cookies do not store any personal information.
Non-necessary
Any cookies that may not be particularly necessary for the website to function and is used specifically to collect user personal data via analytics, ads, other embedded contents are termed as non-necessary cookies. It is mandatory to procure user consent prior to running these cookies on your website.
SAVE & ACCEPT